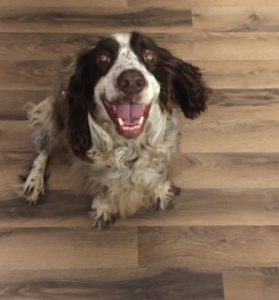 Hi, my name is Silas Merchant. I don’t know how to write, so I’m telling my human mom, Debi, this story so she can share with y’all. The picture is of me smiling – yes, dogs smile, and I smiled all the time.

I loved my new home because they were both retired, and were able to spend time with me most days. I also had a new older brother, a dog named Tucker; an older sister, another dog, named Penny; and another older sister, a cat named Molly. Molly thought she was a dog, and acted like the alpha dog of the house, and basically scared me. But Tucker and Penny became great friends of mind. The three of us had so much fun together.

I settled into a life of ease. A dream life for a dog. My humans had grandkids who came and played with us all the time. I was the only dog who enjoyed playing ball, and my humans bought me a whole container of three tennis balls. The grandkids loved throwing the ball and l loved chasing it down. We would play for hours.

Everything was great until one day when I developed a terrible cough. I think it was sometime in 2019 when that happened. My parents said it sounded like a smoker’s cough, but I promise I NEVER smoked cigarettes! And I never coughed anything up, it just sounded like my entire stomach would come up.

My dad recorded it, so they could play it for the vet. The vet said she’d only heard a cough like that once before, and it was her own dog who had cancer. She said since I was a mature (I don’t like the word “old”) dog,  she wouldn’t recommend exploratory surgery. It would be best to just let me live until I couldn’t. Being a dog, I really didn’t understand all that and just continued to chase tennis balls and have fun with my family.

Thanksgiving week of 2020 was weird because for some reason I began having nose bleeds. Turns out I needed a blood transfusion, and a nice dog at the vet named Atlas was able to donate blood to me. The vet said I must have somehow gotten into some rat poisoning, but since my parents never used that, it’s still a mystery. From then on the people at the vet called me their miracle dog because they really didn’t think I’d survive.

In July 2021, I had a stroke! Yeah, I know, that’s usually just a human thing, but go figure, lucky me had a stroke. The only good thing about that was that I got to spend a few days at the University of Georgia Vet School! I loved watching the UGA bulldogs football games with my humans, and being there on campus was awesome! I wore my UGA collar with pride. They nursed me back to health, and within a few months I was chasing tennis balls again.

As 2022 began, my parents and I began to notice I wasn’t able to run as fast and as long as I used to. My horrible coughs were happening more often, but I still wasn’t throwing anything up. We all thought it was my “mature age” that was slowing me down.

I couldn’t jump up on the bed anymore, so my parents bought some steps. None of us dogs could figure out how to use them, although the “alpha dog cat”, Molly, went up and down them as if she were the queen.

At my yearly checkup, I’d lost a few pounds, but I didn’t think much of that because my human mom is always wanting to lose a few pounds, so I thought that was a good thing.

Then one day I heard my mom tell my dad that I wasn’t smiling anymore. They also noticed I looked like I’d lost more weight. And then I began throwing up my food! Back to the vet we went, and I was diagnosed with pancreatitis. They gave me an iv, but it wasn’t stopping my nausea. They did xrays and found I had a large growth that was inoperable and was preventing food from giving me the nourishment I needed to live.

I knew then that my journey to the rainbow bridge had begun. I was able to smile once or twice, to let my parents know I understood what they had to do.

They were both holding onto me as the process began. I looked up and saw the rainbow bridge, and it reminded me of running and chasing my tennis balls like I used to do. Then I saw Him. I saw God in His white robe, motioning me over the bridge. I looked again into my parents’ faces and knew they’d be okay because God would take care of them.

God takes care of everyone all the time. God and I raced over that bridge into the most beautiful place I’d ever seen. I knew I was covered in love. After all, dog spelled backwards is GOD, and we dogs love like God, unconditionally.

Silas really did help me write this.

One Reply to “My Journey to the Rainbow Bridge”