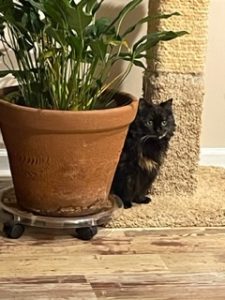 The pretty cat above is our Molly. She’s a one of a kind, beautiful, tortoiseshell cat. The story below isn’t about her, but based on her personality it sure could have been.

A friend of mind was taking her cat to the vet. Now, unless you have a cat, you may not know how difficult it is to get them into those cute little plastic carriers that make it “easy” to transport them. It’s basically a two person job, both dressed in combat gear.

Those sweet little kitties hate, and I mean HATE, to get into the carriers. The most effective way I’ve found to get a cat into a carrier is turning the carrier up on it’s end, and putting the kitty in back feet first – and, trust me, that’s a hit-or-miss kind of thing.

This particular day, my friend’s spouse wasn’t available to suit up and help with the carrier process, and after several failed attempts, she just gave up and put the cat in the back seat of her car.

Mr. Kitty was NOT amused, and as cats have a tendency to do, began making his displeasure known. He bellowed, as only a cat can, as he walked back and forth in the back seat like a caged lion.

Eventually, he realized there was a world outside the windows, and he decided to investigate. Upon putting his front paws on the door handle, he hit the button to lower the window and promptly jumped out of the moving car!

My friend was stunned to say the least, and quickly turned the car around and headed back the way she had come, expecting the worse.

This is where the God thing begins to take shape. As she scanned the highway looking for, and praying she’d find, Mr. Kitty, she felt God guiding her as she made one turn after the other.

She finally spotted him several streets away from where he’d jumped out, sitting beside a building that was formerly a church.  She pulled into the adjacent parking lot, and confirmed that it was in fact, her cat.

She parked the car and carefully approached him, carrying a container of cat food. He was so petrified from his experience, he would not come to her.

She looked around for someone to help her, when she realized she was in the parking lot of the strip mall where her friend’s restaurant, Our Daily Bread, had been.  Even though it’s now a bakery, she felt compelled to go in there looking for help.

Through her tears, and still carrying her cat food, she asked  the gentleman working there to help her coral her cat. Once he got past the shock of seeing an hysterical woman carrying a container of cat food, he followed her outside. Together they coaxed Mr. Kitty to come to her, and the story ended happily. She got Mr. Kitty back into the car, locked the windows, and continued to the vet.

Some may say that was just a coincidence, but I don’t think so. There was basically zero percent chance of finding her cat unharmed!

I know it was a God thing, and that God protected Mr. Kitty as he jumped from the car on that busy highway. It was a God thing, that the cat found his way to the parking lot my friend was already familiar with.

That’s how God works. Even when we make a mistake, God is there with us every moment as we try to get out of whatever we’ve gotten ourselves into. As my friend prayed, God guided her eyes where to look, and what turns to make,  just as He had guided Mr. Kitty.

God is ALWAYS with us, and He cares about us – even when we get ourselves into a mess.

God things happen all the time. Be mindful of them, and thankful for them.