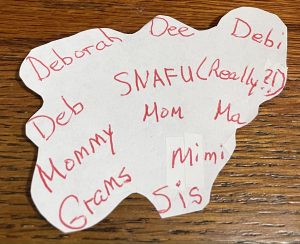 So, what IS in a name?  Names are important, not only our given name, but also the names we earn along the way in life. Names define who we are. Names are many times endearments. Names make us unique.

My given name is Deborah.  My friends call me Dee, Deb, or Debi (some spell that Debbie or Debby, but I prefer Debi). My sisters occasionally refer to me as Sis. Daddy’s pet name for me was  SNAFU.

It wasn’t until I was an adult working for Uncle Sam that I learned the true meaning of the term SNAFU. One day a co-worker whose desk was near mine, said, “Awe, SNAFU.” I thought he was talking to me and replied, “How did you know my nickname, and what have I done, now?”

He began to laugh and said, “I didn’t know your nickname. SNAFU is an old Army term used when things are messed up.” I should have known. Daddy served in the Army during WWII. And the meaning of the term?:  Situation Normal,  All  Fowled Up! Okay, so maybe I got myself into some situations that would have warranted the nickname, just sayin’.

A little over three years after Daddy walked SNAFU down the aisle, I acquired the name, Mommy. As the years passed, that was shortened to Mom and now, Ma.

When grandbaby #1 was on the way, I chose the youngest sounding grandmother name I could come up with at the time which was Grams. After all, I was a mere 50 years, 364 days old when that grandbaby arrived. I  needed a cool, young sounding name. A few years later, grandbaby #3 decided I looked more like a Mimi than a Grams, so I now answer to both Grams and Mimi.

All of the various names throughout my life have special meaning to me . Yes, even SNAFU.

No matter what I’m called, and who knows what grandbaby #4 will come up with, I want to be known as someone who is real, and genuine. Someone who loves her Lord,  loves her family, loves her friends, and lives life to the fullest.  May each of you do the same.

What’s in a name? A great deal! A great life! No matter what we’re called.