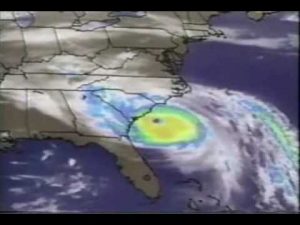 Well, it looks like I’ve got a musical theme going again this time. I enjoy listening to various genres of music, so my personal playlist is very diverse, including rock ‘n roll, line dance music, waltzes, country, and gospel.

The country and gospel songs usually tell stories, and the ones in my playlist are the songs that touch my soul.

One such song, written by Bryan Fowler and Ryan Stevenson is In the Eye of the Storm.

Growing up on the SC coast, I’m more familiar than I care to be with “the eye of the storm”. The picture above is Hurricane Hugo as it came ashore in Charleston, SC, in September 1989. The dot you see inside the yellow area is the eye.

The eye in a hurricane is the area where there is calm, coming after the initial hit and before the final hit. Thus it is surrounded by the walls of the storm. The strongest winds of a hurricane are typically on the right side of the eye, which is determined by the direction the storm is moving.

Hugo devastated many cities and towns in its path. My hometown of Hanahan, SC (10 miles north of Charleston), was one of them. It looked like a bomb had been dropped. I had never seen so much debris and ruin. My friends who rode it out (meaning they did not evacuate) said they’d never do it again. They described the moment the eye passed through as a reprieve and calm from the winds and the rain, giving them just enough time to run outside and check on neighbors and have brief conversations before retreating back to their houses to batten down the hatch again for the second and more brutal wall of the storm.

Life is like that. We get hit from all directions, and we intuitively know we are in the eye of our life’s storm. All around us the storm rages on, but if we have God in our lives we are never alone. God carries us and comforts us no matter what our storm may be.

The lyrics of In the Eye of the Storm touch my soul because the very essence of the song is God’s presence in the eye of our life storms. If you’ve never heard the song, google it. It’s worth the time.

And when you’re in the midst of a life storm, KNOW that God has your back. KNOW that you’re not alone.

2 Replies to “The Eye of the Storm”