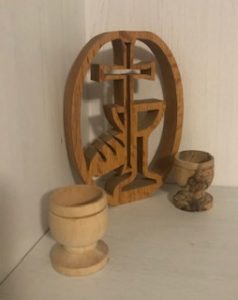 I’ve been in church since I was two weeks old. Until 1997, I’d been a member of several Southern Baptist churches in the various cities I’d lived. In 1997 I jumped ship to the United Methodist Church.

Communion (or the Lord’s Supper in some circles) is one of the most sacred times in the life of a Christian.

It is a time to reflect on the ultimate gift of Jesus Christ – His life. On the night He was betrayed He broke bread with His 12 apostles. Many refer to that as the Last Supper.

Accounts of this meal can be found in three of the Gospels – Mathew, Mark, and Luke. My favorite is Luke’s account in Chapter 22:19-20 (NIV)

19 And he took bread, gave thanks and broke it, and gave it to them, saying, “This is my body given for you; do this in remembrance of me.” 20 In the same way, after the supper he took the cup, saying, “This cup is the new covenant in my blood, which is poured out for you.

Regardless of what Christian denomination you attend, you will hear words similar to Luke’s account during the Communion service.

At the Baptist churches I attended, the bread was usually in the form of wafers, and was passed around on a plate, up and down each pew, similar to the way offering plates are passed. Instead of putting money in, you took a wafer out. Once everyone had received a wafer, the minister would say “the body of Christ given for you”, and we would all eat our wafer. Likewise, the juice was placed in tiny glasses (smaller than shot glasses) that fit into a special tray with little openings just big enough for the glass to be secured in place. These containers were also passed up and down each pew, and again we each took our tiny glass of juice. Once everyone had received their glass, the minister would say “the blood of Christ shed for you, drink ye all of it”.

The Methodist church I attend, as well as Episcopal and Presbyterian churches I’ve visited, use a method called “intinction”. Several servers stand in groups of two, down at the front of the sanctuary at the end of each aisle. The first one holds the bread and the other holds the juice goblet. Ushers direct the flow of traffic. As you receive your piece of bread, that server says, “the body of Christ given for you”. You then dip your bread into the goblet of juice, and that server says, “the blood of Christ shed for you”.

The very first time I partook of Communion in my current church, the minister happened to be at the end of the aisle that I was in. As I received my bread, he said, “the body of Christ given for you, Debi”. Hearing my name took my breath away, and I have never forgotten that. Each and every time since, I hear that pastor’s words using MY NAME, as I partake of Communion.

COVID19 has wreaked havoc on our daily lives, including our church attendance. As I write this, my husband and I have not been in a church building for services in over six months. Our church streams services on their Facebook page and via You Tube.

Communion is different as well. Rather than what we’re used to, Matthew and I have been using real wine and rye toast for our Communion service. Many times we’re in our jammies. Some may think that is sacrilegious, but we don’t. God accepts us as we are, where we are. What matters is our hearts. Each and every time I hear the words “Christ body given for you, Debi”, and it takes my breath away.

Too many times, people get caught up in the details, and forget totally what it’s all about – God and His love for us. So much so, that He gave His only Son to die for us.

So, until the coast is clear of COVID19, and it is again safe to worship God within the church building, Matthew and I will continue to worship Him and commune with Him with real wine, rye toast, and in our jammies.