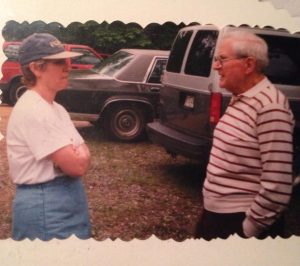 Recently, as I sat down to write, it was my sister Gail’s 66th birthday, and memories of her were flooding my heart. The problem is she’s in Heaven and I’m here on Earth missing her – like I have every day since she died.

I don’t remember many of our disagreements, but one stood out that morning for some reason.

It was Thanksgiving Day of 1994. The details of the argument are not important. Daddy and I were engaged in a heated disagreement. Gail, and I’m sure other family members overheard, because Barringtons can occasionally get loud.

I ultimately decided to leave, and as I was walking out of the house Gail stopped me and said, “How could you do that?! You’re breaking his heart”. “Don’t you think he’s breaking my heart, too?”, I retorted before I continued out the door. Yes, I walked out. I left.

Not one of my finer moments. Daddy and I each felt we were right in our respective stances, but neither of us handled it well. Which brings me to the topic of today’s blog.

I’ve heard that the reason family members, and/or good friends, can hurt each other so easily is because we’re like porcupines – the closer we get, the more we stick each other with our quills or needles. A very “pointed” observation that must have some truth, ya think?

Some of the worst arguments are among family members, and/or good friends. Whether  it’s politics (definitely off limits at Barrington gatherings), religion, or perhaps something said, done, or NOT done, that one person took the wrong way or was hurt by the action or in-action, whatever the case my be. The problem is as bad as that run-on sentence!!

As my opening story indicates, I’m as guilty as anyone when it comes to this. The questions is why do we act this way – or better stated, “react” this way? Why do we feel justified in verbally accosting someone just because he/she said/did/didn’t do what WE expected?!

Well, the answer may surprise you. It’s because we’re human!! Yep, HUMAN. Selfish, always want our way, human. If you think about it, that’s why Eve and Adam ate the apple! Just sayin’.

That isn’t to imply that there aren’t legitimate reasons for getting hurt/angry about something said/done/not done. However, our response will most likely drive an argument or calm the situation. If we yell, scream, or otherwise verbally accost the other person, an argument is almost guaranteed. If we respectfully explain our position, and allow the other person to explain theirs, most likely there will be a resolution, even if it’s nothing more than each of us understanding the other better.

A gentle answer turns away wrath, but a harsh word stirs up anger. (Proverbs 15:1 – NIV).

The soothing tongue is a tree of life, but a perverse tongue crushes the spirit. (Proverbs 15:4 – NIV)

The key is being hurt/angry, but coming across as calm and in control when you present your position. Easier said than done, I know. It’s so simple and so hard. And yet, if we are to love and grow together, and live in peace, we MUST learn it and live it.

The above picture is one someone snapped as Daddy and I were in a deep discussion (not the one in this story) at another family gathering, just to give you an idea of what a “Barrington standoff” looks like.